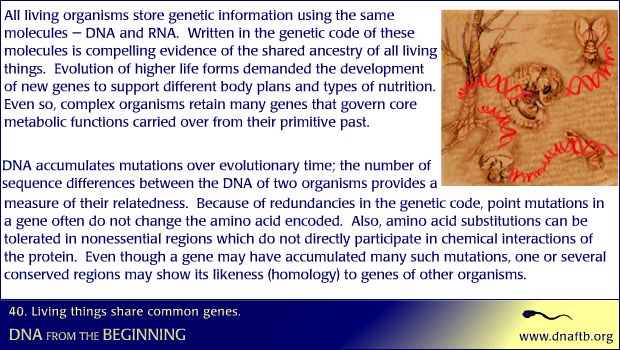 All living organisms store genetic information using the same molecules â€” DNA and RNA. Written in the genetic code of these molecules is compelling evidence of the shared ancestry of all living things. Evolution of higher life forms requires the development of new genes to support different body plans and types of nutrition. Even so, complex organisms retain many genes that govern core metabolic functions carried over from their primitive past. Genes are maintained over an organism's evolution, however, genes can also be exchanged or "stolen" from other organisms. Bacteria can exchange plasmids carrying antibiotic resistance genes through conjugation, and viruses can insert their genes into host cells. Some mammalian genes have also been adopted by viruses and later passed onto other mammalian hosts. Regardless of how an organism gets and retains a gene, regions essential for the correct function of the protein are always conserved. Some mutations can accumulate in non-essential regions; these mutations are an overall history of the evolutionary life of a gene.

Use green fluorescent protein to tag expression of genes.