Concept 33: Genes can be turned on and off. 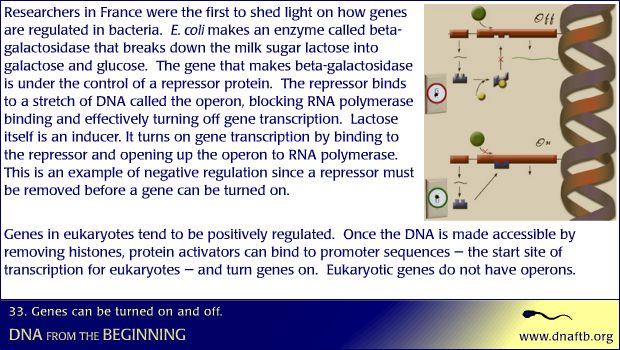 As researchers untangled the genetic code and the structure of genes in the 1950s and 60s, they began to see genes as a collection of plans, one plan for each protein. But genes do not produce their proteins all the time, suggesting that organisms can regulate gene expression. French researchers first shed light on gene regulation using bacteria. When lactose is available, E. coli turn on an entire suite of genes to metabolize the sugar. Researchers tracked the events lactose initiates and found that lactose removes an inhibitor from the DNA. Removing the inhibitor turns on gene production. The gene that produces the inhibitor is a regulatory gene. Its discovery altered perceptions of development in higher organisms. Cells not only have genetic plans for structural proteins within their DNA, they also have a genetic regulatory program for expressing those plans.

François Jacob talks about Genes control the structure of proteins

16735. Concept 36: Different genes are active in different kinds of cells.

Cells differentiate because specific enzymes turn genes on and off in various cell types.