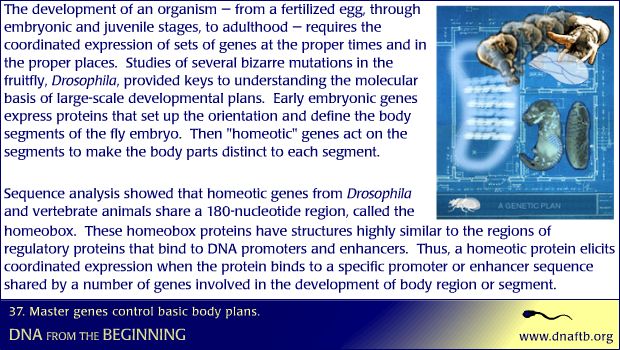 The development of an organism â€” from a fertilized egg, through embryonic and juvenile stages, to adulthood â€” requires the coordinated expression of sets of genes at the proper times and in the proper places. Studies of several bizarre mutations in the fruitfly, Drosophila, provided keys to understanding the molecular basis of large-scale developmental plans. Early embryonic genes express proteins that set up the orientation and define the body segments of the fly embryo. Then "homeotic" genes act on the segments to make the body parts distinct to each segment. Sequence analysis showed that homeotic genes from Drosophila and vertebrate animals share a 180-nucleotide region, called the homeobox. These homeobox proteins have structures highly similar to the regions of regulatory proteins that bind to DNA promoters and enhancers. Thus, a homeotic protein elicits coordinated expression when the protein binds to a specific promoter or enhancer sequence shared by a number of genes involved in the development of body region or segment.

A cuticular preparation of a wild-type Drosophila embryo highlighting the segments and body structure.

The fruit fly is easy to maintain, has large numbers of offspring, and grows quickly. The fruit fly shares with humans a number of so-called “master,” or homeotic, genes.

Geneticist Mark Stoneking talks about the difficulties of measuring time by mutations.

16856. Animation 41: DNA is only the beginning for understanding the human genome.

Signal transduction is cell communication that involves a series of molecular transformations.