Concept 34: Genes can be moved between species. 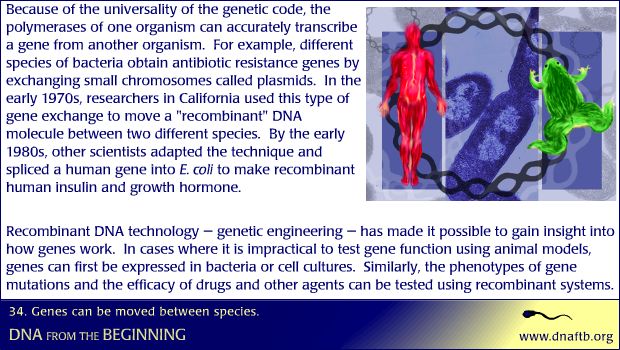 Because of the universality of the genetic code, the polymerases of one organism can accurately transcribe a gene from another organism. For example, different species of bacteria obtain antibiotic resistance genes by exchanging small chromosomes called plasmids. In the early 1970s, researchers in California used this type of gene exchange to move a "recombinant" DNA molecule between two different species. By the early 1980s, other scientists adapted the technique and spliced a human gene into E. coli to make recombinant human insulin and growth hormone. Recombinant DNA technology â€” genetic engineering â€” has made it possible to gain insight into how genes work. In cases where it is impractical to test gene function using animal models, genes can first be expressed in bacteria or cell cultures. Similarly, the phenotypes of gene mutations and the efficacy of drugs and other agents can be tested using recombinant systems.

15476. Mechanism of Recombination, 3D animation with with basic narration

16856. Animation 41: DNA is only the beginning for understanding the human genome.

This method uses homologous recombination to disable a gene of interest to produce a genetic knockout.

Use green fluorescent protein to tag expression of genes.