Some DNA does not encode protein. 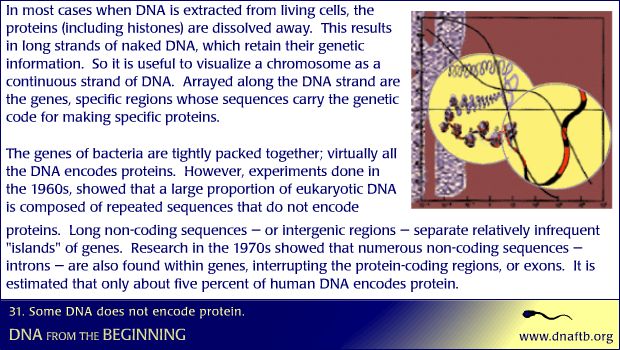 In most cases when DNA is extracted from living cells, the proteins (including histones) are dissolved away. This results in long strands of naked DNA, which retain their genetic information. So it is useful to visualize a chromosome as a continuous strand of DNA. Arrayed along the DNA strand are the genes, specific regions whose sequences carry the genetic code for making specific proteins. The genes of bacteria are tightly packed together; virtually all the DNA encodes proteins. However, experiments done in the 1960s, showed that a large proportion of eukaryotic DNA is composed of repeated sequences that do not encode proteins. Long non-coding sequences â€” or intergenic regions â€” separate relatively infrequent "islands" of genes. Research in the 1970s showed that numerous non-coding sequences â€” introns â€” are also found within genes, interrupting the protein-coding regions, or exons. It is estimated that only about five percent of human DNA encodes protein.

Each chromosome is a package for one very long, continuous strand of DNA.