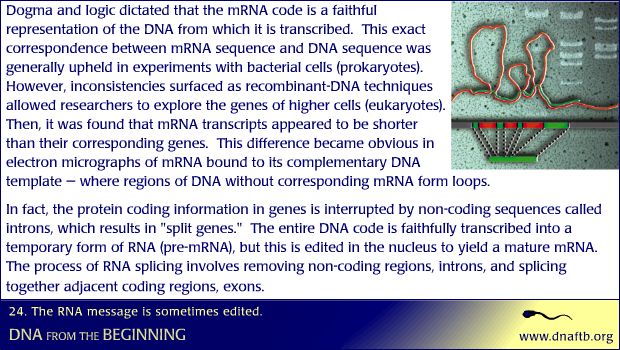 Dogma and logic dictated that the mRNA code is a faithful representation of the DNA from which it is transcribed. This exact correspondence between mRNA sequence and DNA sequence was generally upheld in experiments with bacterial cells (prokaryotes).However, inconsistencies surfaced as recombinant-DNA techniques allowed researchers to explore the genes of higher cells (eukaryotes). Then, it was found that mRNA transcripts appeared to be shorter than their corresponding genes. This difference became obvious in electron micrographs of mRNA bound to its complementary DNA template â€” where regions of DNA without corresponding mRNA form loops. In fact, the protein coding information in genes is interrupted by non-coding sequences called introns, which results in "split genes." The entire DNA code is faithfully transcribed into a temporary form of RNA (pre-mRNA), but this is edited in the nucleus to yield a mature mRNA. The process of RNA splicing involves removing non-coding regions, introns, and splicing together adjacent coding regions, exons.

16937. An Explanation of RNA Splicing

An animation shows alternate splicing of the SMN2 gene.

16936. An Introduction to RNA Splicing

A step-by-step 2D animation shows the details of RNA splicing.