DNA is packaged in a chromosome. 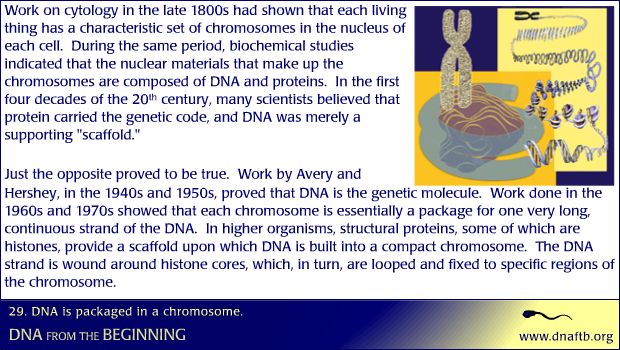 Each chromosome is a package for one very long, continuous strand of DNA.

Work on cytology in the late 1800s had shown that each living thing has a characteristic set of chromosomes in the nucleus of each cell. During the same period, biochemical studies indicated that the nuclear materials that make up the chromosomes are composed of DNA and proteins. In the first four decades of the 20th century, many scientists believed that protein carried the genetic code, and DNA was merely a supporting "scaffold." Just the opposite proved to be true. Work by Avery and Hershey, in the 1940s and 1950s, proved that DNA is the genetic molecule. Work done in the 1960s and 1970s showed that each chromosome is essentially a package for one very long, continuous strand of the DNA. In higher organisms, structural proteins, some of which are histones, provide a scaffold upon which DNA is built into a compact chromosome. The DNA strand is wound around histone cores, which, in turn, are looped and fixed to specific regions of the chromosome.

Electron micrograph of the DNA and the protein scaffold left over from one chromosome (insert) with all the histone stripped out.