Concept 21: RNA is an intermediary between DNA and protein. 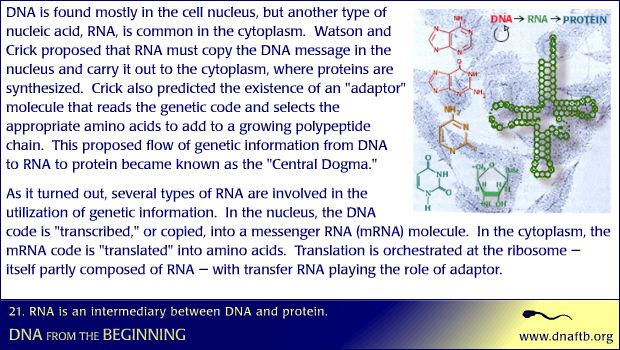 DNA is found mostly in the cell nucleus, but another type of nucleic acid, RNA, is common in the cytoplasm. Watson and Crick proposed that RNA must copy the DNA message in the nucleus and carry it out to the cytoplasm, where proteins are synthesized. Crick also predicted the existence of an "adaptor" molecule that reads the genetic code and selects the appropriate amino acids to add to a growing polypeptide chain. This proposed flow of genetic information from DNA to RNA to protein became known as the "Central Dogma." As it turned out, several types of RNA are involved in the utilization of genetic information. In the nucleus, the DNA code is "transcribed," or copied, into a messenger RNA (mRNA) molecule. In the cytoplasm, the mRNA code is "translated" into amino acids. Translation is orchestrated at the ribosome â€”itself partly composed of RNA â€” with transfer RNA playing the role of adaptor.

15481. Translation: RNA to protein, 3D animation with no audio

Translation: RNA to protein, 3D animation with no audio

In this section learn that in the cytoplasm, the messenger RNA is released from its carrier proteins and binds to a protein assembly complex called a ribosome.

James Watson talks about the Central Dogma: transcription and translation.