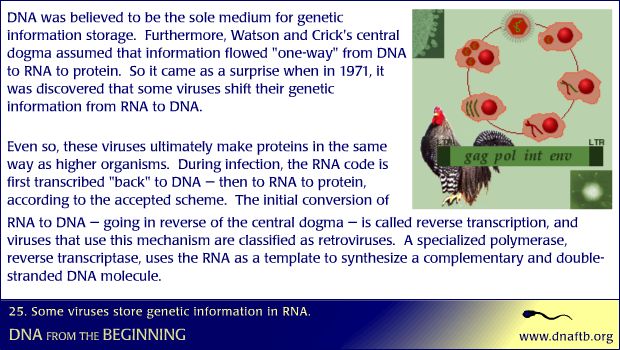 Reverse transcription is found in retroviruses.

DNA was believed to be the sole medium for genetic information storage. Furthermore, Watson and Crick's central dogma assumed that information flowed "one-way" from DNA to RNA to protein. So it came as a surprise when in 1971, it was discovered that some viruses shift their genetic information from RNA to DNA. Even so, these viruses ultimately make proteins in the same way as higher organisms. During infection, the RNA code is first transcribed "back" to DNA â€” then to RNA to protein, according to the accepted scheme. The initial conversion of RNA to DNA â€” going in reverse of the central dogma â€” is called reverse transcription, and viruses that use this mechanism are classified as retroviruses. A specialized polymerase, reverse transcriptase, uses the RNA as a template to synthesize complementary and double-stranded DNA molecule.

James Watson talks about RNA's role in the cell.

James Watson talks about the Central Dogma: transcription and translation.

16725. Animation 35: DNA responds to signals from outside the cell.

James Darnell explains how chemical signals turn eukaryotic genes on and off.

James Watson and Francis Crick developed the idea to explain how DNA and RNA related in protein production.