Concept 32: Some DNA can jump. 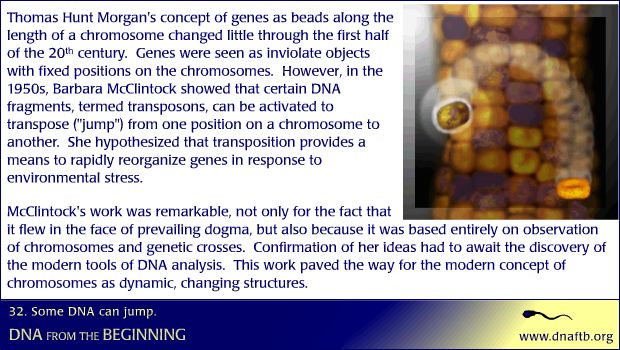 Barbara McClintock showed that transposon DNA can be activated to jump to another position on a chromosome.

Thomas Hunt Morgan's concept of genes as beads along the length of a chromosome changed little through the first half of the 20th century. Genes were seen as inviolate objects with fixed positions on the chromosomes. However, in the 1950s, Barbara McClintock showed that certain DNA fragments, termed transposons, can be activated to transpose ("jump") from one position on a chromosome to another. She hypothesized that transposition provides a means to rapidly reorganize genes in response to environmental stress. McClintock's work was remarkable, not only for the fact that it flew in the face of prevailing dogma, but also because it was based entirely on observation of chromosomes and genetic crosses. Confirmation of her ideas had to await the discovery of the modern tools of DNA analysis. This work paved the way for the modern concept of chromosomes as dynamic, changing structures.

The Maize Genome Project is the culmination of a century of maize research at Cold Spring Harbor Laboratory that began with George Shull and continued with Nobel Laureate Barbara McClintock.

Barbara McClintock did pioneer work in plant genetics. She received the Nobel Prize for Physiology or Medicine in 1983.