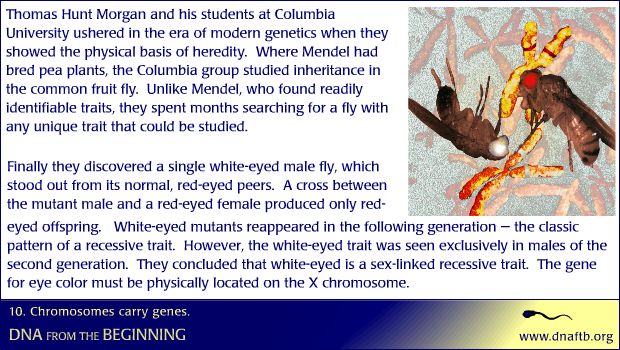 Thomas Hunt Morgan and his students at Columbia University ushered in the era of modern genetics when they showed the physical basis of heredity. Where Mendel had bred pea plants, the Columbia group studied inheritance in the common fruit fly. Unlike Mendel, who found readily identifiable traits, they spent months searching for a fly with any unique trait that could be studied. Finally they discovered a single white-eyed male fly, which stood out from its normal, red-eyed peers. A cross between the mutant male and a red-eyed female produced only red-eyed offspring. White-eyed mutants reappeared in the following generation â€” the classic pattern of a recessive trait. However, the white-eyed trait was seen exclusively in males of the second generation. They concluded that white-eyed is a sex-linked recessive trait. The gene for eye color must be physically located on the X chromosome.

The fruit fly is easy to maintain, has large numbers of offspring, and grows quickly. The fruit fly shares with humans a number of so-called “master,” or homeotic, genes.

The Fly Room at Columbia University, around 1920.