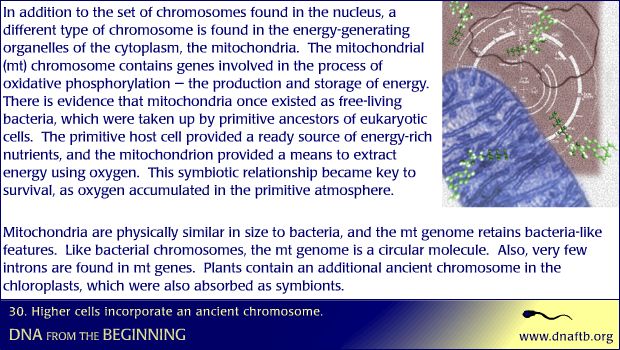 In addition to the set of chromosomes found in the nucleus, a different type of chromosome is found in the energy-generating organelles of the cytoplasm, the mitochondria. The mitochondrial (mt) chromosome contains genes involved in the process of oxidative phosphorylation â€” the production and storage of energy. There is evidence that mitochondria once existed as free-living bacteria, which were taken up by primitive ancestors of eukaryotic cells. The primitive host cell provided a ready source of energy-rich nutrients, and the mitochondrion provided a means to extract energy using oxygen. This symbiotic relationship became key to survival, as oxygen accumulated in the primitive atmosphere. Mitochondria are physically similar in size to bacteria, and the mt genome retains bacteria-like features. Like bacterial chromosomes, the mt genome is a circular molecule. Also, very few introns are found in mt genes. Plants contain an additional ancient chromosome in the chloroplasts, which were also absorbed as symbionts.

DNA found in the mitochondrion of a cell differs in structure and is separate from the DNA found in the cell nucleus. Mitochondrial DNA, or mtDNA, exists as a circular loop of double-stranded DNA rather than the linear form found in nuclear DNA. However,

The human mitochondrial genome consists of a DNA ring of about 16,570 nucleotides. It contains 37 genes, most of which are coding for mitochondrial tRNAs.

Human mitochondrial DNA is 16,569 base pairs in length.