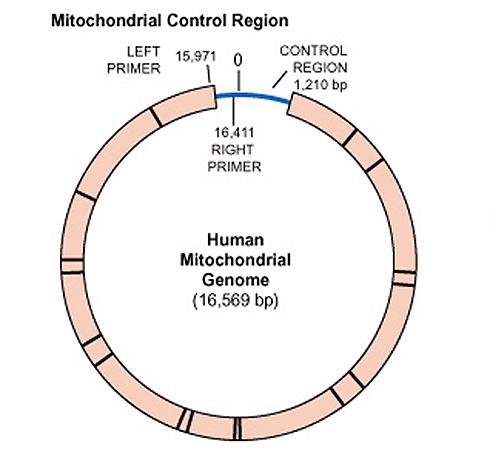 The human mitochondrial genome consists of a DNA ring of about 16,570 nucleotides. It contains 37 genes, most of which are coding for mitochondrial tRNAs. The remaining genes play important roles in oxydative phosporylation. Mutations in mitochondrial genes have been identified are the causes for a variety of diseases and, potentially, aging. The mitochondrial genome has essentially bacterial features. A stretch of roughly 1,100 nucleotides is gene-free. I thas been called D-Loop, Displacement Loop, and Control Region. The D-Loop conatins two regions within which mutations accumulate more frequently than anywhere else in the mitochondrial genome. The regions are called hypervariable regions HVR1 and HVR2, respectively.

DNA found in the mitochondrion of a cell differs in structure and is separate from the DNA found in the cell nucleus. Mitochondrial DNA, or mtDNA, exists as a circular loop of double-stranded DNA rather than the linear form found in nuclear DNA. However,

Human mitochondrial DNA is 16,569 base pairs in length.

Variation between mtDNA (HVR1) samples from chimp, Neandertal and human.

Unlike nuclear DNA, mtDNA is Â inherited solely from the mother. (Mitochondria are predominantly from the motherâs egg and not from the fatherâs sperm.) Therefore, mtDNA sequences or orders of nucleotides generally remain constant over many generation

Use mutations to measure human evolution.