Concept 23: A gene is a discrete sequence of DNA nucleotides. 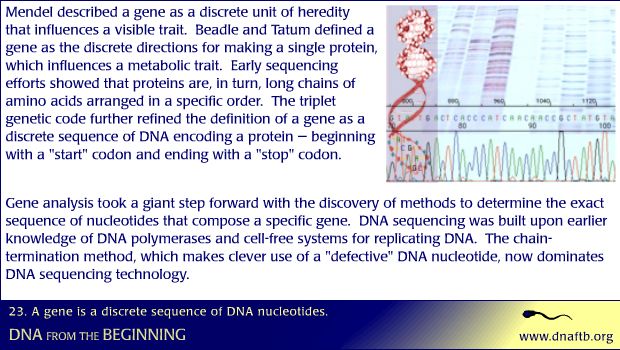 Mendel described a gene as a discrete unit of heredity that influences a visible trait. Beadle and Tatum defined a gene as the discrete directions for making a single protein, which influences a metabolic trait. Early sequencing efforts showed that proteins are, in turn, long chains of amino acids arranged in a specific order. The triplet genetic code further refined the definition of a gene as a discrete sequence of DNA encoding a protein â€” beginning with a "start" codon and ending with a "stop" codon. Gene analysis took a giant step forward with the discovery of methods to determine the exact sequence of nucleotides that compose a specific gene. DNA sequencing was built upon earlier knowledge of DNA polymerases and cell-free systems for replicating DNA. The chain-termination method, which makes clever use of a "defective" DNA nucleotide, now dominates DNA sequencing technology.

The diagram represents a single strand of DNA containing a gene, in purple. Remember this gene is "read" in the 5' to 3' direction to produce an mRNA.

Determine the sequence of DNA.

A gene is a discrete sequence of DNA nucleotides

Sydney Brenner showed that mRNA was the unstable intermediate that carried the message from DNA to the ribosomes.

15356. Determining the nucleotide sequences of all RNA codons, Marshall Nirenberg

Marshall Nirenberg talks about Gobind Khorana, who synthesized many of the triplets needed to finish the decoding process.