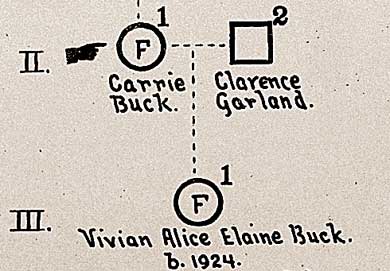 Although it was a bona fide medical diagnosis in its day, "feeblemindedness" had virtually no clinical meaning and is no longer used in medical terminology. Many people who were classified as feebleminded would now be called mildly retarded, learning disabled, or simply underachievers. Contrary to the evidence presented at her trial, Carrie appears to have had no serious mental problem, and she was not promiscuous. Vivian's conception was the result of Carrie's rape by Clarence Garland, the nephew of her foster parents. Carrie, like many unwed mothers of that time, was institutionalized to prevent shame to the family. (DNAi location: Chronicle > Trial of Carrie Buck > Trial)

Paul Lombardo talks about the father of Carrie Buck's child.

Following the trial of Buck vs. Bell, a pedigree chart was created displaying the evidence that had been presented to the court.

Carrie and Emma Buck on the day before the Buck vs. Bell trial in 1924.

A photo of Carrie and her mother Emma was taken the day before the Virginia trial.

Paul Lombardo talks about after raping Carrie, Clarence Garland left Charlottesville rather than fulfill his promise to marry her.

15218. The first witness at Buck vs. Bell trial, Paul Lombardo

Paul Lombardo talks about Arthur Estabrook, a psychologist for the Eugenics Record office, testified that Carrie, her daughter Vivian, and her mother Emma were all feeblminded.

15209. Carrie and Emma Buck the day before the trial, Paul Lombardo

Paul Lombardo discusses Carrie and Emma Buck's state of mind prior to the Buck vs. Bell trial.