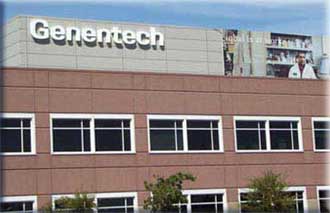 In the 1970s, two biotech companies, Genentech and Biogen, took up the challenge of synthesizing insulin using recombinant DNA technology. Other non-commercial groups were also in on the quest to make human insulin. The idea was to insert the DNA sequence for human insulin into bacteria, and let the bacteria be the factory to produce unlimited quantities of insulin.

David Goeddel was one of the first scientists Herb Boyer hired for the insulin project. Here, David Goeddel talks about Genentech's general strategy for synthesizing insulin.

15928. How insulin is made using bacteria

Synthetic human insulin was the first golden molecule of the biotech industry and the direct result of recombinant DNA technology. Currently, millions of diabetics worldwide use synthetic insulin to regulate their blood sugar levels. Synthetic insulin i

image of Walter Gilbert. Already a well-known and respected scientist, Gilbert co-founded a biotech company, Biogen, in the late 1970s. Today, Biogen is one of the largest biotech companies in the world.

Synthetic human insulin was the first golden molecule of the biotech industry and the direct result of recombinant DNA technology. Currently, millions of diabetics worldwide use synthetic insulin to regulate their blood sugar levels.

How was synthetic insulin first made? Although the idea was simple, in practice there were substantial problems. No one had the human DNA sequence for insulin, and there was a moratorium on the production of human recombinant DNA. Two different strateg

Tour of Genentech by David Ebersman

Walter Gilbert talks about close but no cigar.

In the late 1970s, there was a moratorium on recombinant DNA work. Gilbert had to go to England's Porton Down facility to try and isolate human insulin.