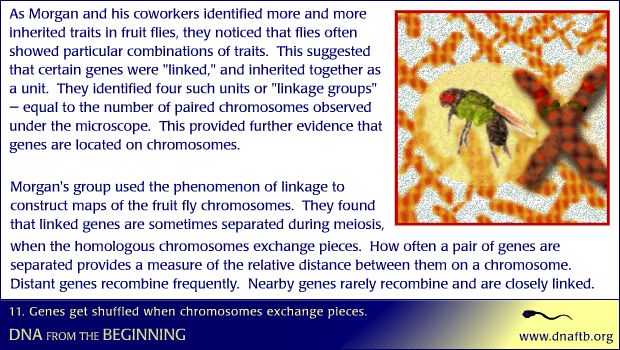 Linkage groups on chromosomes gave clues to where genes are located.

As Morgan and his coworkers identified more and more inherited traits in fruit flies, they noticed that flies often showed particular combinations of traits. This suggested that certain genes were "linked," and inherited together as a unit. They identified four such units or "linkage groups" â€” equal to the number of paired chromosomes observed under the microscope. This provided further evidence that genes are located on chromosomes. Morgan's group used the phenomenon of linkage to construct maps of the fruit fly chromosomes. They found that linked genes are sometimes separated during meiosis, when the homologous chromosomes exchange pieces. How often a pair of genes are separated provides a measure of the relative distance between them on a chromosome. Distant genes recombine frequently. Nearby genes rarely recombine and are closely linked.

Mark Skolnick talks about the hunt for BRCA1.

Locate a disease gene by screening for markers linked to the gene.