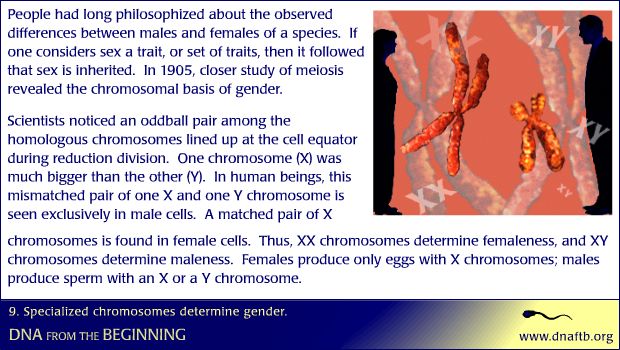 Study of meiosis revealed the chromosomal basis of sex.

People had long philosophized about the observed differences between males and females of a species. If one considers sex a trait, or set of traits, then it followed that sex is inherited. In 1905, closer study of meiosis revealed the chromosomal basis of sex. Scientists noticed an oddball pair among the homologous chromosomes lined up at the cell equator during reduction division. One chromosome (X) was much bigger than the other (Y). In human beings, this mismatched pair of one X and one Y chromosome is seen exclusively in male cells. A matched pair of X chromosomes is found in female cells. Thus, XX chromosomes determine femaleness, and XY chromosomes determine maleness. Females produce only eggs with X chromosomes; males produce sperm with an X or a Y chromosome.

15520. DNA is organized into 46 chromosomes including sex chromosomes, 3D animation

DNA is organized into 46 chromosomes including sex chromosomes, 3D animation

The two genes that produce red and green light-sensitive proteins are located on the X chromosome.