All cells arise from pre-existing cells. 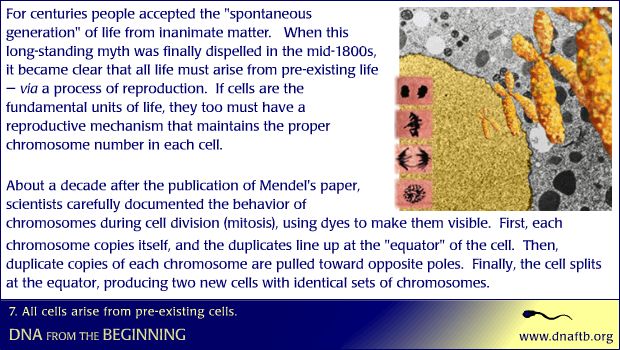 An overview of the discovery of cell division, mitosis.

For centuries people accepted the "spontaneous generation" of life from inanimate matter. When this long-standing myth was finally dispelled in the mid-1800s, it became clear that all life must arise from pre-existing life â€” via a process of reproduction. If cells are the fundamental units of life, they too must have a reproductive mechanism that maintains the proper chromosome number in each cell. About a decade after the publication of Mendel's paper,scientists carefully documented the behavior of chromosomes during cell division (mitosis), using dyes to make them visible. First, each chromosome copies itself, and the duplicates line up at the "equator" of the cell. Then, duplicate copies of each chromosome are pulled toward opposite poles. Finally, the cell splits at the equator, producing two new cells with identical sets of chromosomes.

16229. All cells arise from pre-existing cells.

16236. All cells arise from pre-existing cells.

DNAFTB Problem 7:Look at the chromosome number of fruit flies.

Professor Robert Weinberg explains how normal cells can only double a certain limited number of times; and cancer cells have to learn how to proliferate indefinitely, i.e, they have to become immortalized.