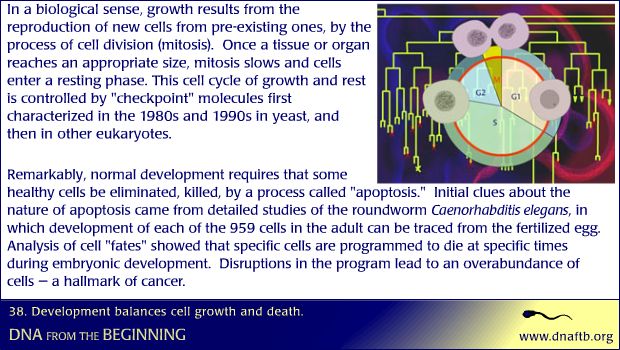 In a biological sense, growth results from the reproduction of new cells from pre-existing ones, by the process of cell division (mitosis). Once a tissue or organ reaches an appropriate size, mitosis slows and cells enter a resting phase. This cell cycle of growth and rest is controlled by "checkpoint" molecules first characterized in the 1980s and 1990s in yeast, and then in other eukaryotes. Remarkably, normal development requires that some healthy cells be eliminated, killed, by a process called "apoptosis." Initial clues about the nature of apoptosis came from detailed studies of the roundworm Caenorhabditis elegans, in which development of each of the 959 cells in the adult can be traced from the fertilized egg. Analysis of cell "fates" showed that specific cells are programmed to die at specific times during embryonic development. Disruptions in the program lead to an overabundance of cells â€” a hallmark of cancer.

This movie is made from time-lapsed photographs of a developing C. elegans embryo. The arrow points to a cell undergoing programmed cell death.

Professor Robert Weinberg, explains that cancer cells have to learn how to invade and metastasize.

Compounds inherent in berries, pomegranate juice, wine and green tea have all been cited as having the potential to help people live longer and better.

How he ended up in Bob Horvitz's lab working on cell death.