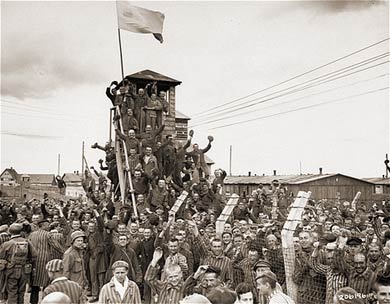 In February 1945, von Verschuer fled Berlin in the face of the advancing Russian army and sent the files of the Kaiser Wilhelm Institute away for safekeeping in western Germany. Two truckloads of documentation on the Auschwitz twin projects disappeared. After the war, von Verschuer denied that Mengele had been his assistant or that he had any knowledge of the details of the Auschwitz experiments. In 1949, a committee of professors, including Nobel Laureate Adolf Butenandt, officially cleared von Verschuer. He returned to academia as Professor of Human Genetics at the University of Munster, establishing it as a major center of genetics research. Josef Mengele, the "angel of death," fled to South America in 1949 and was never apprehended. (DNAi location: Chronicle>In the Third Reich > Epilogue)

15470. The moral responsibility of scientists in Nazi Germany, James Watson

James Watson tlks about the moral responsibility of scientists in Nazi Germany.

Benno MÃ¼ller-Hill and James Watson discuss what happened to Nazi doctors after the war and what can be learned from Hitler's attempt to make a perfect race. German psychiatrists and doctors learned about euthanasia in medical school and, so, saw nothing