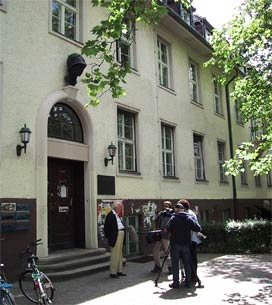 In the late 1920s, eugenics was gathering steam in Germany - with help from America. In 1927, the Rockefeller Foundation provided funds for the constructon of the Kaiser Wilhelm Institute of Anthropology, Human Genetics, and Eugenics in Berlin. The director, appropriately named Eugen Fischer, collaborated with Charles Davenport in the management of the International Federation of Eugenics Organizations. On the occasion of the International Eugenics Congress in Rome, in 1929, they drafted a memo to Mussolini encouraging him to move ahead on eugenics with "maximum speed." In 1936, Harry Laughlin's contributions to race hygiene in Germany were recognized with an honorary degree from the University of Heidelberg. (DNAi location: Chronicle > In the Third Reich > Taking the torch)

James Watson talks about eugenics loses favor in the U.S., but gains support in Nazi Germany .