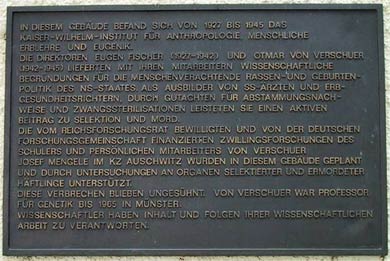 English translation: This building was occupied from 1927-1945 by the Kaiser-Wilhelm-Institute for Anthropology, Human Genetics, and Eugenics. Under the directorship of Eugen Fischer (1927-1942) and Otmar von Verschuer (1942-1945) the institute provided scientific justifications for the inhuman race and birth policies of the NS regime. Â It provided expert opinions on issues concerning family records and forced sterilizations, and instructed SS physicians and judges who presided over cases concerning genetic "health." Thus, Fischer, Verschuer, and their staff actively contributed to the selection of "unworthy life" and murder. Joseph Mengele, a student and close collaborator of von Verschuer, planned his twin studies here, and organs removed from selected and murdered prisoners were examined in this building. Mengele conducted his research with approval by the Reichsforschungsrat (Reich Research Council) and financed by the Deutsche Forschungsgemeinschaft (German Science Foundation) in the Auschwitz concentration camp. These crimes remain unpersecuted and unpunished. Von Verschuer taught until 1965 as Professor for Genetics in MÃ¼nster, Germany. Scientists are to be held responsible for the content and consequences of their research. (DNAi location: Chronicle > In the Third Reich > Taking the torch)