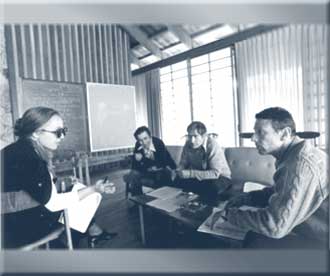 Asilomar meeting. February 1975. (L to R) Maxine Singer, Norton Zinder, Sydney Brenner, Paul Berg. With the invention of recombinant DNA (rDNA), scientists were faced with the daunting task of determining whether the new technology was safe. Was the ability to splice genes the biological equivalent of the atom bomb or the telescope? These concerns were addressed in 1975 at the Asilomar conference center in California, where scientists, lawyers, and the media gathered for grueling debate.

Matthew Meselson and Franklin Stahl invented the technique of density gradient centrifugation and used this to prove that DNA is replicated semi-conservatively.

15284. The media at Asilomar, Sydney Brenner

Sydney Brenner talks about his suggestion that the Press switch off their tape recorders at Asilomar.

15024. The origin and utility of recombinant DNA, Paul Berg

Paul Berg discusses the usefulness of recombinant DNA to isolate and study genes.

Image of Paul Berg, Brooklyn-bred chemistry whiz. Known for his pioneering work in recombinant DNA, which won him a Nobel Prize in 1980.

In 1974, scientists in the field of recombinant DNA drafted a letter calling upon "scientists throughout the world" to suspend certain types of studies until hazards could be assessed. Paul Berg talks about the "Moratorium Letter."

New technologies that permit us to observe the workings of the human brain and to influence its function also raise critical ethical and policy questions.