Concept 39: A genome is an entire set of genes. 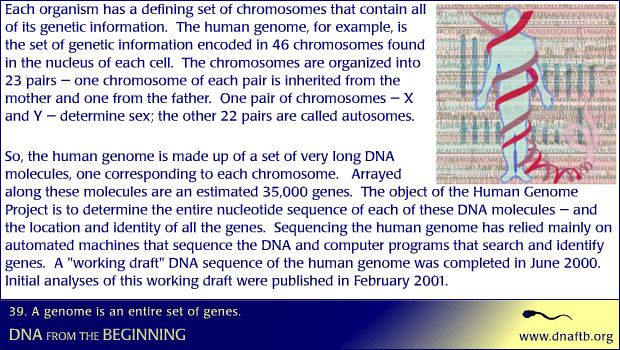 Our genome is a set of long DNA molecules containing tens of thousands of genes.

Each organism has a defining set of chromosomes that contain all of its genetic information. The human genome, for example, is the set of genetic information encoded in 46 chromosomes found in the nucleus of each cell. The chromosomes are organized into 23 pairs â€” one chromosome of each pair is inherited from the mother and one from the father. One pair of chromosomes â€” X and Y â€” determine sex; the other 22 pairs are called autosomes. So, the human genome is made up of a set of very long DNA molecules, one corresponding to each chromosome. Arrayed along these molecules are an estimated 35,000 genes. The object of the Human Genome Project is to determine the entire nucleotide sequence of each of these DNA molecules â€” and the location and identity of all the genes. Sequencing the human genome has relied mainly on automated machines that sequence the DNA and computer programs that search and identify genes. A "working draft" DNA sequence of the human genome was completed in June 2000. Initial analyses of this working draft were published in February 2001.

James Watson talks about beginnings of the Human Genome Project at the Cold Spring Harbor Laboratory.

Professor Allen Moore explains that since the beginning of the human genome project sequencing technology has become considerably cheaper and we now have sequences for many different organisms.

For the first draft of the genome sequence, both teams were working to identify the number of human genes. Here, Ewan Birney, a "numbers man" from the public genome project, explains how genes can be recognized and the data from the genome project used.