Concept 20: A half DNA ladder is a template for copying the whole. 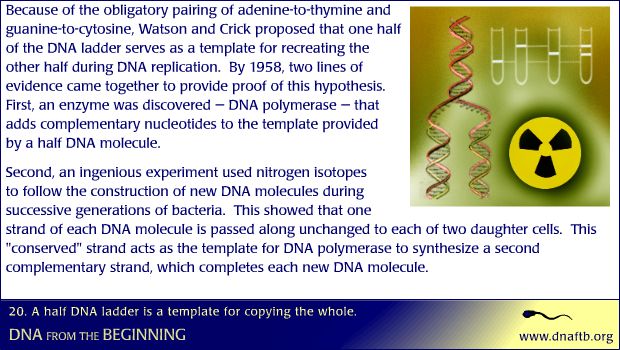 Because of the obligatory pairing of adenine-to-thymine and guanine-to-cytosine, Watson and Crick proposed that one half of the DNA ladder serves as a template for recreating the other half during DNA replication. By 1958, two lines of evidence came together to provide proof of this hypothesis. First, an enzyme was discovered â€” DNA polymerase â€” that adds complementary nucleotides to the template provided by a half DNA molecule. Second, an ingenious experiment used nitrogen isotopes to follow the construction of new DNA molecules during successive generations of bacteria. This showed that one strand of each DNA molecule is passed along unchanged to each of two daughter cells. This "conserved" strand acts as the template for DNA polymerase to synthesize a second complementary strand, which completes each new DNA molecule.

16443. Animation 20: A half DNA ladder is a template for copying the whole

Matthew Meselson and Franklin Stahl show how new DNA is made by copying the old.

15530. DNA replication: how genetic information is passed on, 3D animation with narration

The structure of DNA, that Watson and Crick discovered, suggests how genetic information is passed on.