Concept 19: The DNA molecule is shaped like a twisted ladder. 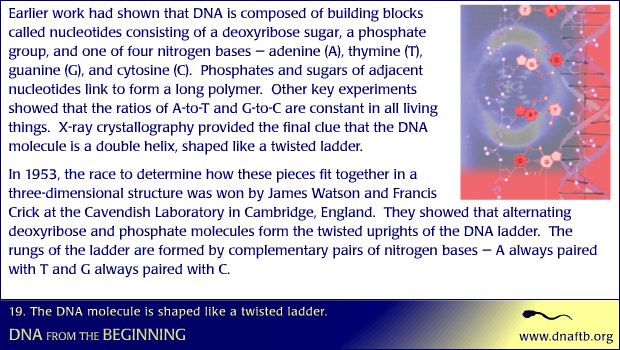 Earlier work had shown that DNA is composed of building blocks called nucleotides consisting of a deoxyribose sugar, a phosphate group, and one of four nitrogen bases â€” adenine (A), thymine (T), guanine (G), and cytosine (C). Phosphates and sugars of adjacent nucleotides link to form a long polymer. Other key experiments showed that the ratios of A-to-T and G-to-C are constant in all living things. X-ray crystallography provided the final clue that the DNA molecule is a double helix, shaped like a twisted ladder. In 1953, the race to determine how these pieces fit together in a three-dimensional structure was won by James Watson and Francis Crick at the Cavendish Laboratory in Cambridge, England. They showed that alternating deoxyribose and phosphate molecules form the twisted uprights of the DNA ladder. The rungs of the ladder are formed by complementary pairs of nitrogen bases â€” A always paired with T and G always paired with C.

15493. The double helical structure of DNA, 3D animation with no audio

1953 picture of Francis Crick (L) and James Watson (R) walking along the backs of King's College in Cambridge.

15455. Winning the race for the double helix, James Watson

James Watson talks about his partnership with Francis Crick.