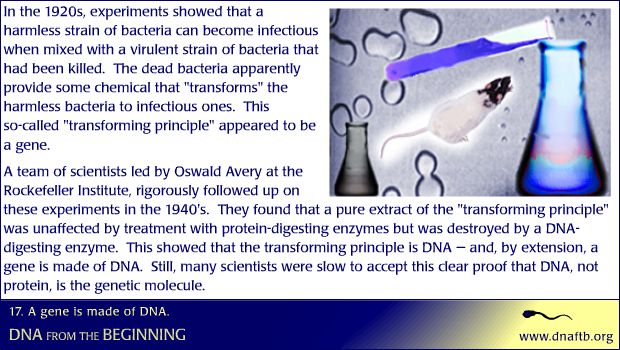 Oswald Avery's team proves that DNA, not protein, is the genetic molecule.

In the 1920s, experiments showed that a harmless strain of bacteria can become infectious when mixed with a virulent strain of bacteria that had been killed. The dead bacteria apparently provide some chemical that "transforms" the harmless bacteria to infectious ones. This so-called "transforming principle" appeared to be a gene. A team of scientists led by Oswald Avery at the Rockefeller Institute, rigorously followed up on these experiments in the 1940's. They found that a pure extract of the "transforming principle" was unaffected by treatment with protein-digesting enzymes but was destroyed by a DNA-digesting enzyme. This showed that the transforming principle is DNA â€” and, by extension, a gene is made of DNA. Still, many scientists were slow to accept this clear proof that DNA, not protein, is the genetic molecule.

Oswald Avery explains Fred Griffith's and his own work with Pneumococcus bacteria.

In 1944, Oswald Avery and his colleagues, Colin MacLeod and Maclyn McCarty published their landmark paper on the transforming ability of DNA.

15476. Mechanism of Recombination, 3D animation with with basic narration

In 1944, Maclyn McCarty and his colleagues, Colin MacLeod and Oswald Avery published their landmark paper on the transforming ability of DNA.

A page from the May 15, 1943 letter from Oswald Avery to his brother Roy. In the letter Avery speculated on how transformation could happen. Avery never publicly connected genes with DNA and his transformation experiments.