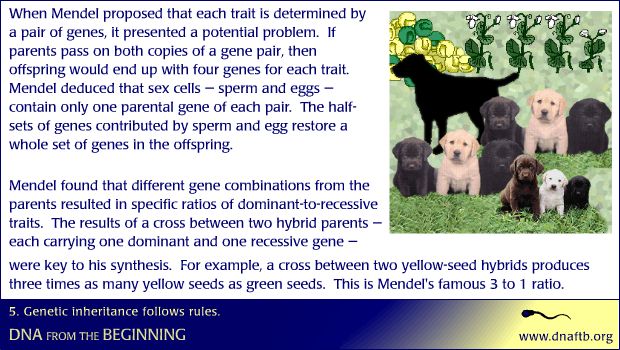 When Mendel proposed that each trait is determined by a pair of genes, it presented a potential problem. If parents pass on both copies of a gene pair, then offspring would end up with four genes for each trait. Mendel deduced that sex cells sperm and eggs contain only one parental gene of each pair. The half-sets of genes contributed by sperm and egg restore a whole set of genes in the offspring. Mendel found that different gene combinations from the parents resulted in specific ratios of dominant-to-recessive traits. The results of a cross between two hybrid parents each carrying one dominant and one recessive gene were key to his synthesis. For example, a cross between two yellow-seed hybrids produces three times as many yellow seeds as green seeds. This is Mendel's famous 3 to 1 ratio.

An interactive Punnett Square inheritance calculator to work out patterns of recessive inheritance for a trait.

An interactive Punnett Square calculator to work out patterns of inheritance for a recessive genetic disease.

Mendel deduced that pure-bred parents have two copies of the same gene for each trait.

An interactive Punnett Square calculator to work out patterns of autosomal recessive inheritance.

16313. Problem 12: Evolution begins with the inheritance of gene variations.