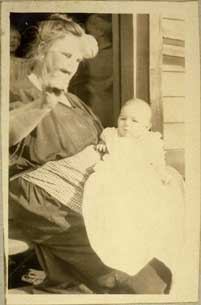 Carrie's daughter, Vivian Dobbs, was found to be feebleminded at the age of about seven months. Arthur Estabrook testified at trial that she was feebleminded, and said that he had given her the usual test for a baby of about six months old, but that in fact she had failed. The test, this picture seems to suggest, was to hold a coin in front of the baby's eyes. She didn't focus, and therefore she was declared like her mother, feebleminded. (DNAi location: Chronicle > Trial of Carrie Buck > Players)

Carrie Buck's daughter Vivian was found to be feebleminded at the age of about seven months.

Paul Lombardo talks about Arthur Estabrook apparently tested Vivian's mental ability by attempting to catch her attention with a coin.

15218. The first witness at Buck vs. Bell trial, Paul Lombardo

Paul Lombardo talks about Arthur Estabrook, a psychologist for the Eugenics Record office, testified that Carrie, her daughter Vivian, and her mother Emma were all feeblminded.

Following the trial of Buck vs. Bell, a pedigree chart was created displaying the evidence that had been presented to the court.

11255. Vivian Buck and foster mother Alice Dobbs in Charlottesville, taken by A.H. Estabrook the day before the Buck v. Bell trial in Virginia

Vivian Buck and foster mother Alice Dobbs in Charlottesville, taken by A.H. Estabrook the day before the Buck v. Bell trial in Virginia

Paul Lombardo talks about Vivian was on the honor roll in the first grade at Venable School, proving that she was not the third generation of imbeciles.

Arthur Estabrook was perhaps the most successful of all the field workers trained at the Eugenics Record Office.

The day before the Virginia case, Arthur Estabrook photographed Carrie and Emma on a bench located at this spot in the Virginia Colony.