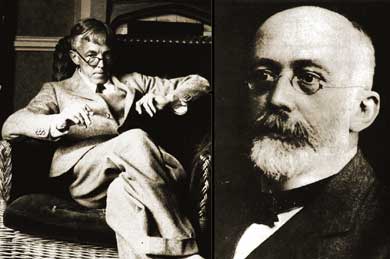 The equilibrium model of G.N. Hardy and Wilhelm Weinberg showed that sterilization of affected individuals themselves would never appreciably reduce the incidence of mental disorders, which were thought to be inherited in a recessive manner. Only a hideously massive program - sterilizing or segregating the vast reservoir of heterozygous carriers predicted by the model - would have any hope of reducing the incidence of mental illness. (DNAi location: Chronicle > Trial of Carrie Buck > Prologue)

Paul Lombardo talks about Emma and Carrie Buck lived long lives and it is doubtful that either was mentally ill.

15214. Eugenics and forced sterilization in the U.S., Paul Lombardo

Paul Lombardo talks about eugenicists viewed sterilization as a means to reduce the tax burden of people who lived in public mental institutions.

Harry Laughlin was the superintendent of the Eugenics Record Office in New York, and had written a model sterilization law in 1914, portions of which were borrowed by Virginians to use in their own 1924 law.

Carrie and Emma Buck on the day before the Buck vs. Bell trial in 1924.

A photo of Carrie and her mother Emma was taken the day before the Virginia trial.

Paul Lombardo talks about Arthur Estabrook apparently tested Vivian's mental ability by attempting to catch her attention with a coin.