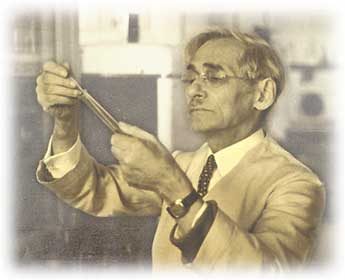 After Miescher's discovery, other scientists found better ways to purify the new substance. Nuclein was a crude extract and contained a lot of proteins. Once the proteins were removed, the "pure" substance became known as deoxyribonucleic acid because of its sugar structure (ribose-based) and its properties (acidic nature). Scientists, such as Phoebus Levene, began deconstructing the DNA components. They found that DNA was essentially a long-chain molecule, made up of four different nucleotides, ribose sugar, and phosphate.

16342. Animation 15: DNA and proteins are key molecules of the cell nucleus.

16358. Problem 15: DNA and proteins are key molecules of the cell nucleus.

Phoebus Levene was an organic chemist in the early 1900's. He is perhaps best known for his incorrect tetranucleotide hypothesis of DNA.

Phoebus Levene's contributions -- the distinction between DNA and RNA.

Did Levene's tetranucleotide theory affect the development of ideas in the field of nucleic acid research?