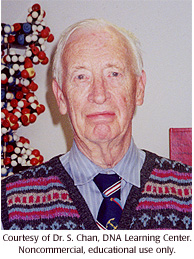 Paul Zamecnik was born in Cleveland, Ohio. He went to Dartmouth College and graduated from Dartmouth Medical School in 1934. Although he trained to be a medical doctor, Zamecnik was always interested in science. He eventually decided to go into research because there was so much to discover. His interest in protein synthesis started with a question. In 1938, as an intern, Zamecnik was doing an autopsy on an obese woman. He wondered why there was fat when there should have been protein and muscle - no one knew the answer. In 1939, Zamecnik approached Max Bergmann, a protein chemist at the Rockefeller Institute. He was hoping to get a job in Bergmann's lab so he could work on the problem of protein synthesis. Bergmann turned him down because Zamecnik was an M.D, not a Ph.D. Zamecnik did get a fellowship to work with Kaj LinderstrÃ¸m-Lang at the Carlsberg Laboratory in Denmark. LinderstrÃ¸m-Lang was a leader in the field of protein chemistry and Zamecnik obtained enough training and experience that Bergmann gave him a job when he came back to the States. Zamecnik didn't stay at the Rockefeller for long. He was offered a job at the Huntington Laboratory at the Massachusetts General Hospital in Boston. Here, he worked with Fritz Lipmann (1953 Nobel laureate) and used radioactive isotopes to prove that proteins were built from amino acids in a process requiring chemical energy - ATP. Zamecnik then became interested in how protein sequences were specified and to understand that he tried to isolate and identify all the components necessary for protein synthesis. In 1952, Zamecnik was partially successful in that he made a cell-free extract from rat liver with which he was able to synthesize proteins from amino acids. In 1953, using this system, Zamecnik and Mahlon Hoagland showed that amino acids had to be energized, "activated," by ATP before they were incorporated into a peptide chain. Then in 1956, Hoagland followed up on an observation Zamecnik made earlier. Zamecnik noticed that low molecular weight RNA in the cell-free extract could be associated with radiolabeled amino acids. This led to the identification of tRNA - the adaptors Francis Crick predicted in his Central Dogma.

Paul Zamecnik developed a cell-free extract that he and Mahlon Hoagland used to study protein synthesis. They identified tRNA as the adaptor predicted by Francis Crick in his Central Dogma

Paul Zamecnik developed a cell-free extract that he and Mahlon Hoagland used to study protein synthesis. They identified tRNA as the adaptor predicted by Francis Crick in his Central Dogma

Phoebus Levene was an organic chemist in the early 1900's. He is perhaps best known for his incorrect tetranucleotide hypothesis of DNA.

Frederick Sanger received two Nobel prizes (in the same category), for his work on protein sequencing and DNA sequencing.

David Baltimore, Howard Temin and Renato Dulbecco shared the 1975 Nobel Prize in Physiology or Medicine for the discoveries concerning the interaction between tumor viruses and the genetic material of the cell.

Thomas Cech and Sidney Altman discovered that RNA can have enzymatic activities. For this discovery, they shared the 1989 Nobel Prize for Chemistry.