Concept 28: Some types of mutations are automatically repaired. 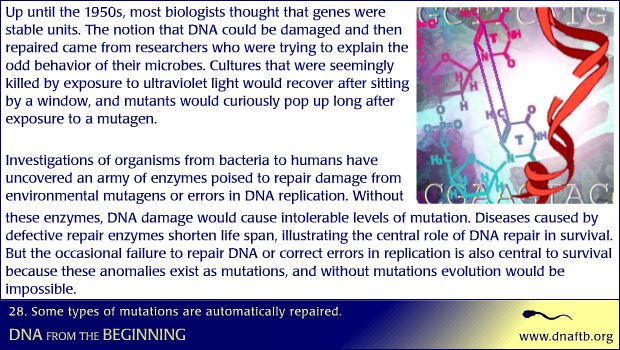 DNA repair is central to survival.

Up until the 1950s, most biologists thought that genes were stable units. The notion that DNA could be damaged and then repaired came from researchers who were trying to explain the odd behavior of their microbes. Cultures that were seemingly killed by exposure to ultraviolet light would recover after sitting by a window, and mutants would curiously pop up long after exposure to a mutagen. Investigations of organisms from bacteria to humans have uncovered an army of enzymes poised to repair damage from environmental mutagens or errors in DNA replication. Without these enzymes, DNA damage would cause intolerable levels of mutation. Diseases caused by defective repair enzymes shorten life span, illustrating the central role of DNA repair in survival. But the occasional failure to repair DNA or correct errors in replication is also central to survival because these anomalies exist as mutations, and without mutations evolution would be impossible.

16625. Problem 28: Some types of mutations are automatically repaired.

Learn how the cause of Xeroderma pigmentosum is caused by a defect in a DNA repair system.

16613. Animation 28: Some types of mutations are automatically repaired.

The need for a good mutation repair system.

Richard Setlow did a lot of the early work on thymine dimer repair.

This series of animations shows how mutations in the p53 gene are found in 70% of lung tumors, the highest rate for any cancer.

Some mutations are starting points for evolution, others are responsible for disease.

15529. Radiation can cause DNA mutations, 3D animation with narration

Mutations and the molecular clock.