Concept 18: Bacteria and viruses have DNA too. 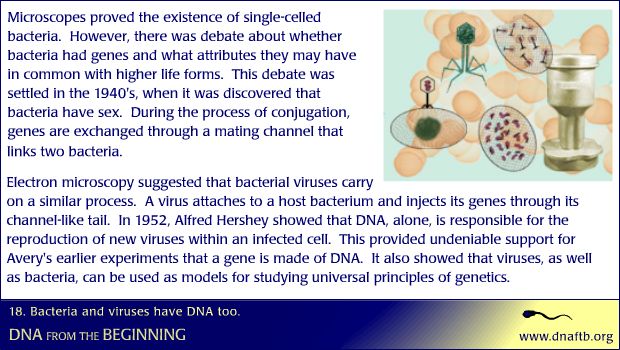 Bacterial conjugation and bacteriophages provide proof that a gene is made of DNA.

Microscopes proved the existence of single-celledbacteria. However, there was debate about whether bacteria had genes and what attributes they may have in common with higher life forms. This debate was settled in the 1940's, when it was discovered that bacteria have sex. During the process of conjugation, genes are exchanged through a mating channel that links two bacteria. Electron microscopy suggested that bacterial viruses carry on a similar process. A virus attaches to a host bacterium and injects its genes through its channel-like tail. In 1952, Alfred Hershey showed that DNA, alone, is responsible for the reproduction of new viruses within an infected cell. This provided undeniable support for Avery's earlier experiments that a gene is made of DNA. It also showed that viruses, as well as bacteria, can be used as models for studying universal principles of genetics.

Bacteria and viruses have DNA too.

Alfred Hershey was a phage geneticist who, with his research assistant, Martha Chase, did one of the most famous experiments in molecular biology. The "blender" experiment proved that DNA carried genetic information.

In 1944, Oswald Avery and his colleagues, Colin MacLeod and Maclyn McCarty published their landmark paper on the transforming ability of DNA.

Oswald Avery explains Fred Griffith's and his own work with Pneumococcus bacteria.

Alfred Hershey working in the lab, 1960.