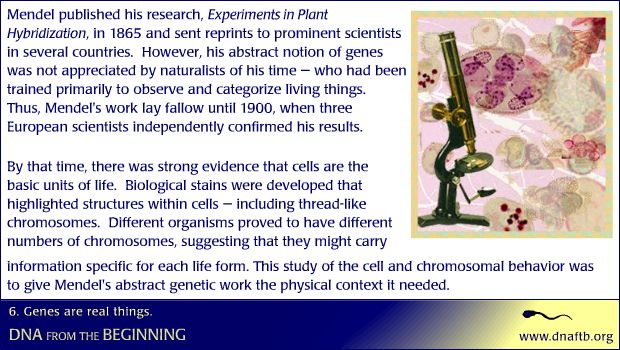 The study of the cell and chromosomal behavior confirmed Mendel's work.

Mendel published his research, Experiments in Plant Hybridization, in 1865 and sent reprints to prominent scientists in several countries. However, his abstract notion of genes was not appreciated by naturalists of his time â€” who had been trained primarily to observe and categorize living things. Thus, Mendel's work lay fallow until 1900, when three European scientists independently confirmed his results. By that time, there was strong evidence that cells are the basic units of life. Biological stains were developed that highlighted structures within cells â€” including thread-like chromosomes. Different organisms proved to have different numbers of chromosomes, suggesting that they might carry information specific for each life form. This study of the cell and chromosomal behavior was to give Mendel's abstract genetic work the physical context it needed.

16735. Concept 36: Different genes are active in different kinds of cells.

Cells differentiate because specific enzymes turn genes on and off in various cell types.

Gregor Mendel and fellow monks, around 1862. Mendel is holding a fuschia sprig - a plant with which he made hybrids.

Punnett devised the "Punnett Square" to depict the number and variety of genetic combinations, and had a role in shaping the Hardy-Weinberg law.