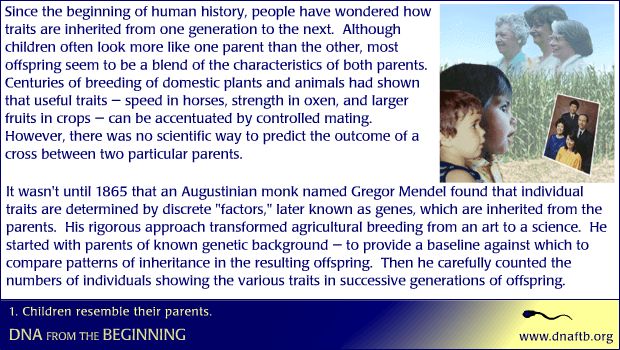 Since the beginning of human history, people have wondered how traits are inherited from one generation to the next.

"Since the beginning of human history, people have wondered how traits are inherited from one generation to the next. Although children often look more like one parent than the other, most offspring seem to be a blend of the characteristics of both parents. Centuries of breeding of domestic plants and animals had shown that useful traits - speed in horses, strength in oxen, and larger fruits in crops - can be accentuated by controlled mating. However, there was no scientific way to predict the outcome of a cross between two particular parents. It wasn't until 1865 that an Augustinian Monk named Gregor Mendel found that individual traits are determined by discrete "factors," later known as genes, which are inherited from the parents. His rigorous approach transformed agricultural breeding from an art to a science. He started with parents of known genetic background - to provide a baseline against which to compare patterns of inheritance in the resulting offspring. Then he carefully counted the numbers of individuals showing the various traits in successive generations of offspring."

The Man, the Monk