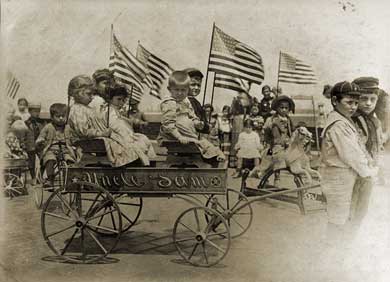 The Johnson Immigration Restriction Act of 1924 made cunning use of statistics to change the complexion of American immigration. It limited immigrants from each country according to their proportion in the U.S. population in 1890, a time prior to the major waves of southern and eastern European immigration when the U.S. was decidedly more Anglo-Nordic in composition. This had the eugenicists - desired effect of cutting off immigration from southern and eastern Europe. This xenophobia persisted for half a century - U.S. immigration did not reach pre-Johnson Act levels again until the late 1980s. (DNAi location: Chronicle > Threat of the Unfit > Epilogue)

Eugenicists were concerned about the hundreds of thousands of southern and eastern Europeans who were entering the country each year through the U.S. immigration facility at Ellis Island,