Concept 15: DNA and proteins are key molecules of the cell nucleus. 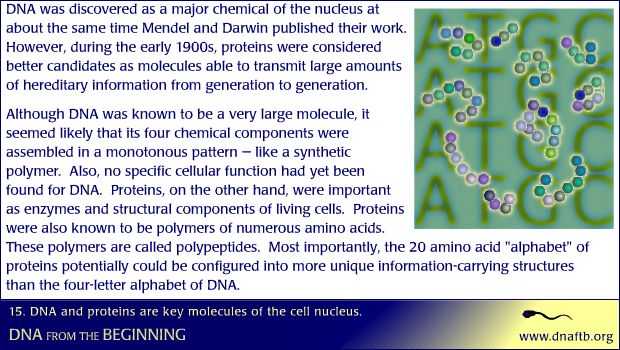 DNA and protein are candidates for transmitting hereditary information.

DNA was discovered as a major chemical of the nucleus at about the same time Mendel and Darwin published their work. However, during the early 1900s, proteins were considered better candidates as molecules able to transmit large amounts of hereditary information from generation to generation. Although DNA was known to be a very large molecule, it seemed likely that its four chemical components wereassembled in a monotonous pattern â€” like a synthetic polymer. Also, no specific cellular function had yet been found for DNA. Proteins, on the other hand, were important as enzymes and structural components of living cells. Proteins were also known to be polymers of numerous amino acids. These polymers are called polypeptides. Most importantly, the 20 amino acid "alphabet" of proteins potentially could be configured into more unique information-carrying structures than the four-letter alphabet of DNA.