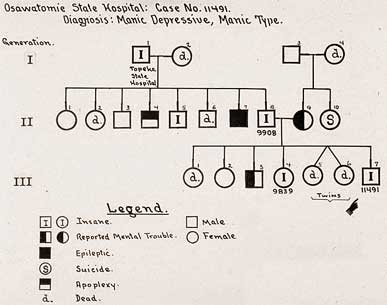 By the turn of the 20th century, people with mental disorders were usually wards of the state, and eugenicists argued that their care was a growing burden on society. Mental patients made good subjects for eugenic study in state institutions, where eugenics case workers could interview them and obtain their family records. Studies at state mental institutions turned up some of the first "evidence" that "social inadequacy" might be in the genes - some institutions housed a number of related inmates.

15818. Four generations in one almshouse

Four generations in one almshouse at one time, Yaphank, Suffolk County, NY

15444. How science was misused to support eugenics, James Watson

James Watson how science was misused to support eugenics.

Dr. Albert Priddy was the first superintendent of the Virginia Colony for Epileptics, which was founded in the first decade of the 20th century.

A review of the symptoms, causes, diagnosis, and treatments of bipolar disorder.

11385. "Indiana Society for Mental Hygiene Bulletin No. 7" (July 1920), statistics on mental illness and feeblemindedness in institutions around the U.S. (2)

"Indiana Society for Mental Hygiene Bulletin No. 7" (July 1920), statistics on mental illness and feeblemindedness in institutions around the U.S. (2)

In this review of schizophrenia, the authors show how our growing knowledge of causal factors offers hope for successful preventive measures.