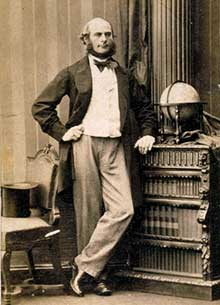 The term eugenics, meaning "well born," was coined in 1883 by Francis Galton, a scientist at University College in London. Galton's conception of eugenics had arisen from his earlier study, Hereditary Genius (1869), in which he used data from biographical dictionaries and alumni records at Oxford and Cambridge Universities to construct pedigrees of leading English families. He concluded that superior intelligence and abilities were inherited with an efficiency of about 20% among primary relatives in these families. Galton also studied the distribution of physical attributes in human populations, from which he and his student Karl Pearson derived the corpus of modern statistics - including chi-square, regression, and correlation. (DNAi location: Chronicle > Threat of the Unfit > Founders)

The term eugenics, meaning "well born," was coined in 1883 by Francis Galton, a scientist at University College in London.

Galton, Wedgewood, and Darwin pedigree. This family was studied as an example of "family-stocks characterized by outstanding capacities in philosophy, science and art."