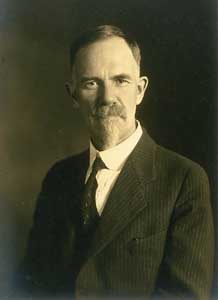 During the first decade of the 20th century, eugenics was organized as a scientific field by the confluence of Mendelian genetics and agricultural breeding. This synthesis was embodied by the Harvard-trained zoologist Charles Davenport, who was among the first American scientists to embrace Mendelian genetics. Davenport published the classical description of the inheritance of eye color in 1907 and also did creditable studies of the genetics of albinism and neurofibromatosis. (DNAi location: Chronicle > Threat of the Unfit > Founders)

Chicken coops on the grounds of the Station for Experimental Evolution (currently Cold Spring Harbor Laboratory), reflecting the interests of director Charles Davenport, 1908.

The Eugenics Record Office in Cold Spring Harbor was established by Charles Davenport.

James Watson talks about the origin of eugenics.